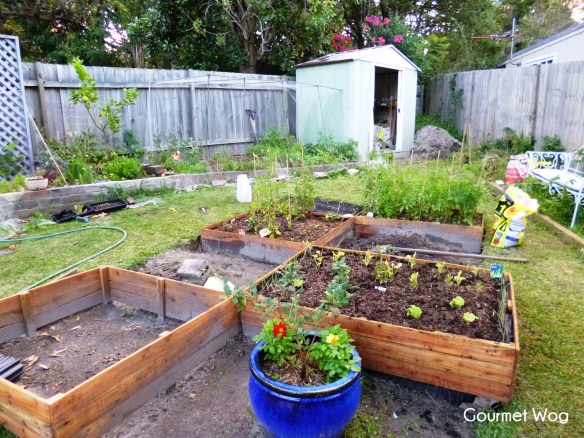 Last month I mentioned Sydney decided to chuck a tanty and forgo spring because the weather was hot hot hot. Then like 30 seconds later, it chucked another tanty and the weather became cold cold cold! I sit here, it my robe and uggies writing this up on the first day of summer.

Welcome to the last Garden Share Collective post for 2013, a collection of vegetable patches across the globe all thanks to Lizzie from Strayed from the Table
Please take the time to take a sticky beak at my previous Garden Share collective posts to catch up or take a refresher on my progress.

3 of our 4 pallet beds are finally planted up. We’ll get to the 4th when I catch my breath!

A lot of prep work went into getting the patches ready. First weed mat was lined along the sides to stop the grass from growing through the pallet boards.

Then 3 layers of thick cardboard was laid down to stop the weeds from sprouting through. Then the fun and smelly part of preparing the soil. My husband spent many weeknights sifting soil to make sure there were no onion weed seeds and to that he added compost, cow manure, mushroom manure, 5 in 1 mix, dynamic lifter and finally chicken shit. Noice.

Next it was time to plant!  We planted up the first bed with tomatoes and basil. It looked like this when first planted up (first week of November):

The 2nd bed turned out to be a ‘bits and pieces’ bed and contains tomatoes, eggplant, basil, parsley, chilli, leeks and poppy flowers

The 3rd Bed (my favourite) is neatly lined with our new crop of leaks, more tomatoes, zucchini and cucumbers. We planted these up 2 days ago, just in time for this post 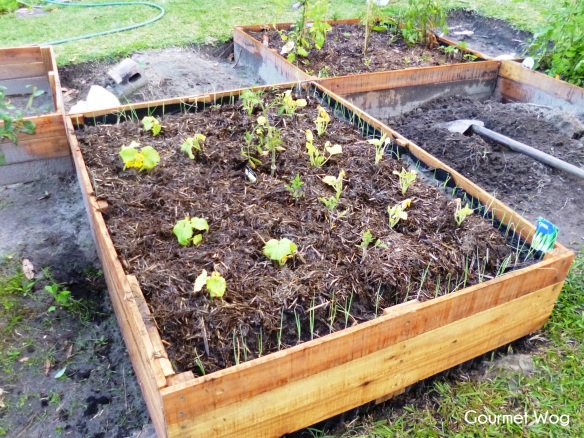 I love the way the leaks border the patch. We made sure to plant the leaks at about 20cms below the rest of the veggie patch to bank up the soil as they grow throughout the next few months.

The other veggie patches are coming along nicely. I won’t show you the kale because you’re probably sick of hearing me talk about it, but just know that they’re still there, they’re thriving and they’re still going berserk.

The purple climbing king beans are doing just that, climbing. We’re yet to see any beans yet.

Our dwarf French beans though are producing masses and masses. I pick a generous handful every single day. Most of the time it doesn’t make it back to the kitchen as they get devoured straight from the plant. 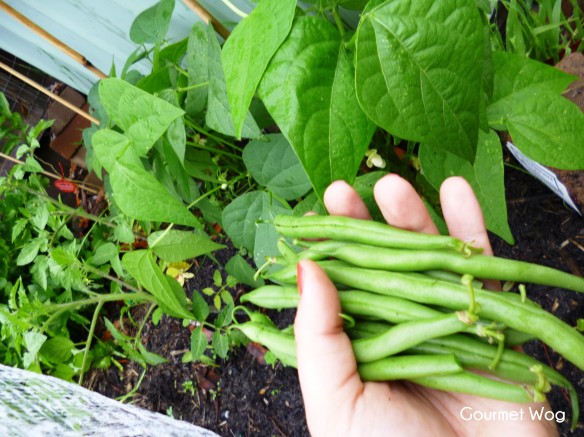 Our Hungarian yellow chillies are rewarding us well. They are surprisingly incredibly chilli! 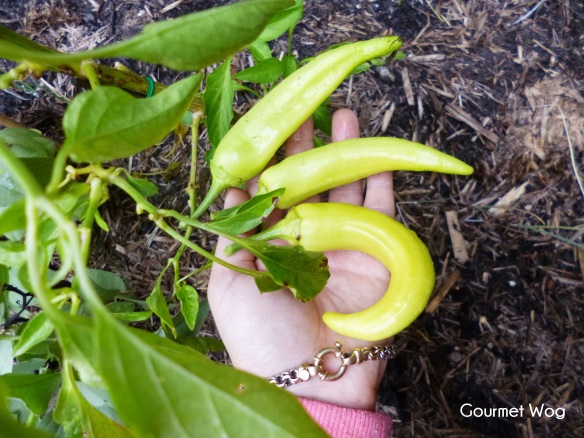 Finally, as hoped, we had much more success with our Pontiac Potatoes. I wanted to leave them to grow a bit longer but we had some really crazy storms in Sydney throughout November, and lots of rain so it was time to harvest them before they rot or go mouldy. These red gems were uncovered after planting only 4 potatoes in the hessian sacks.

And there it is, my last Garden Share Collective for the year. Happy Gardening everyone 