When Celia posted her IMK post in May, she listed a packet of Kataifi asking for suggestions on how to use the packet. I have to admit; I got so excited about making Greek style Walnut Kataifi and started obsessing over it, salivating over the prospect of popping a sugar and cinnamon filled Kataifi in my mouth.

The dessert we’re making is called Kataifi, as is the name of the packet of soft flaky, noodle like pastry. It can be found in most deli fridges. The Greeks call the dessert Kataifi, and Kunefe in the Middle East.

The day after I saw Celias post, I went to my local deli in my work lunch break and picked up packed of Kataifi eager to get home and make the dessert of my dreams. I brought the packet back to work and stored it in the staff fridge so it stays fresh. Then the unthinkable happened. Someone stole my packet! I was so upset and started to point fingers at my employees, give everyone around me the evil eye and no longer trusted any of my colleagues. I raced to the deli after work but it was closed for the day. I was devastated.

I have since left that workplace. I told my friends who work at other companies and they too don’t trust placing items in the communal staff fridge. Appealing lunches and grocery items have disappeared. Who would do that?!!

So fast forward another week and we went to my mother’s place for dinner. She hadn’t made dessert but said she’d do it when I arrived so “we could take pictures for your blog” Isn’t she sweet?! A packet of Kataifi was chilling in the fridge and I was thrilled!

So here we are in my childhood home, my mother’s warm hands making sweet, luscious, nutty, crunchy, buttery Kataifi.

Preheat the oven to 180 degrees Celsius.

Start by making your sugar syrup by combining the sugar, water, lemon rind and lemon juice into a pot and bringing it to a boil. Reduce the heat to medium and let it boil for 15 minutes until it reduces and thickens. Remove from the heat and let it cool down.

Melt the block of butter (yes it’s a lot of butter but it’s totally worth the calories!!) meanwhile empty the packet of Kataifi into a bowl and gently pry the ‘noodles’ until they’re lightly separated. Pour the melted butter onto the Kataifi and rub it evenly in until the Kataifi is completely yellow.

Meanwhile crush the walnuts in a processor, mortar and pestle or by placing them into a zip lock bag and going for your life with a rolling pin

Combine the crushed walnuts with the cinnamon and sugar.

Now to roll! Place a handful of the buttered Kataifi onto a clean surface and level it out flat. Place two tablespoons of the walnut mix onto the top centre. Fold in the sides of the Kataifi and roll the pastry. As we’re using a muffin tray, the shape doesn’t matter as long as the walnuts are enclosed in the pastry.

Place it into a muffin tin. You don’t need to pre grease the tin as your Kataifi pastry is laden with enough butter to ensure it doesn’t catch.

Repeat with the remaining pastry and walnuts.

Bake the Kataifi muffins at 180 degrees for 40 minutes or until golden brown. Pour the cooled down sugar syrup directly into the muffin tray evenly distributing the liquid gold between the muffins.

Allow the sugar syrup to absorb into the Kataifi muffins for at least an hour if you can.

Enjoy with a hot cup of tea. Bliss! 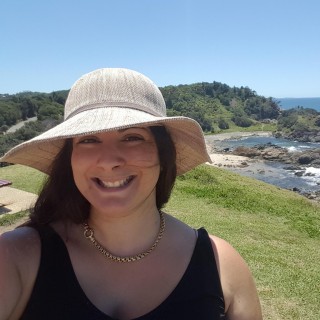